Aptys Solutions is making a few changes at the top.

The company has announced that Brian Geisel will take the helm as president and chief executive officer, taking the place of the resigning Sean Pennock. Also, Chad Terry has been named Aptys’ chief financial officer. 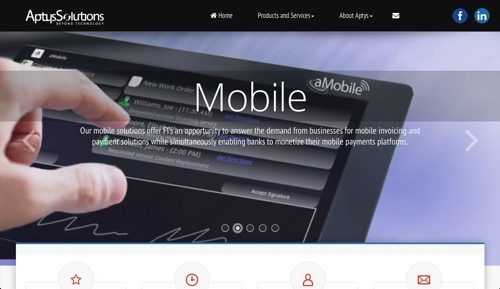 “I am excited about the opportunity to work with Aptys’ talented team, as the company is well-positioned for growth and success,” said Geisel in a statement. “I am committed to leading and growing this company into the future.” Geisel noted that he and Chad Terry had worked together closely in the past, and called Terry’s appointment to CFO “a critical element of our strategy to enhance our core business.”

Brian Geisel (pictured left) is the founder and former CEO of Alogent Corporation, where he spent more than 13 years. He has major payments experience from his nine-plus years as an independent IT and payments consultant for software developers and project managers. Geisel was educated at The University of Georgia.
Chad Terry (pictured below) spent the past four and a half years as chief financial officer for Accelarad, creators of SeeMyRadiology.com. Previous to his tenure at Accelarad, Terry served in a number of senior financial executive positions ranging from CFO at SoloHealth and Seventh Wave Technology to Vice President of Finance at Jack Henry & Associates and Goldleaf Financial Solutions. Terry studied at The University of Georgia’s Terry College of Business.

Aptys Solutions specializes in providing financial institutions with a “complete platform” for payment processing. The company’s technology serves as a one-stop-shop for image exchange, ACH, wire processing, Federal Reserve messaging, in-network exchange, and mobile payments.
Aptys Solutions is headquartered in Rockwall, Texas, and was founded in 2010. The company demoed its Aptys Mobile (aMobile) technology at FinovateSpring 2011.