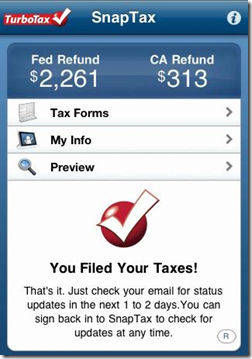 As you can see in the following video, the whole process could be completed in a few minutes. The app launched last year on Jan. 15, just in time for the 2010 tax season. The cost was $9.99 which included Federal and state e-filing.

There’s no word yet on whether the company will be releasing a 2011 version (update: it launches Jan. 13, 2011 and is good in all 50 states). There is no entry in the iTunes store for SnapTax as of today. However, Intuit does have two tax tools available: TaxCaster to estimate your refund and MyTaxRefund to track it.

Analysis: The Intuit app is part of a trend we expect to continue, using smartphone cameras to capture, store, and eliminate the need to store paper receipts and statements. And like Mitek’s Mobile Photo Bill Pay, Intuit’s Snaptax is much more than a dumb scanner. It takes the scan, reads the info, and assists in completing the transaction.

Opportunity for NetBankers: It’s probably too late for 2011 tax season, but if you can be the first one in your market to offer mobile-photo tax-prep next year, it should provide a healthy PR boost come April 2012. You might also consider offering a tax estimator and/or refund tracker to your mobile offering.

Intuit’s SnapTax allowed California taxpayers to file directly from their iPhones in 2010.