ING Direct wasn’t the only one with a Black Friday promotion (yesterday’s post).

Portsmouth, NH-based Service Credit Union also took advantage of the U.S. vacation day to promote a special 10% APY 3-month CD ($1,000 max deposit) and 1% off loan rates (promo page). But unlike ING Direct, the CU’s special offers were redeemable only in its branches, which opened at 5 AM to mimic giant retailer early-morning specials.

I like the creativity, so I’ll give them an A for effort. But seriously, opening at 5 AM? Maybe they were hoping for PR exposure, but it’s just not right (note 1). I understand (sort of), heading to Best Buy in the middle of the night to save a couple hundred on a TV. But who would go to their bank at 5 AM to make an extra $20 on a CD (note 2) or apply for a car loan (note 3)?

But there was one offer in the fine print that was more valuable for a typical Black Friday shopper, fee-free gift cards until noon. Although, I’m not sure why they limited the number to five per customer. 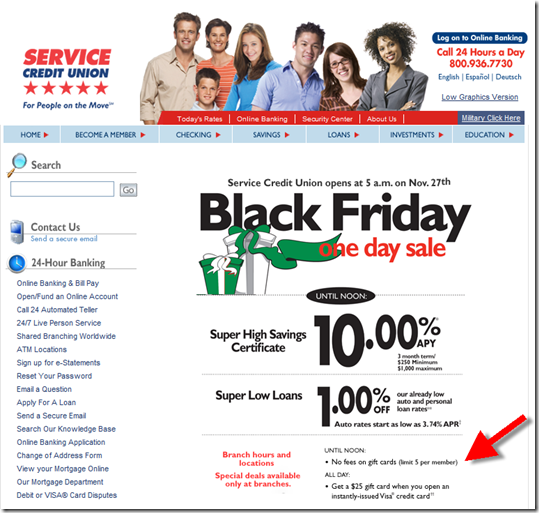 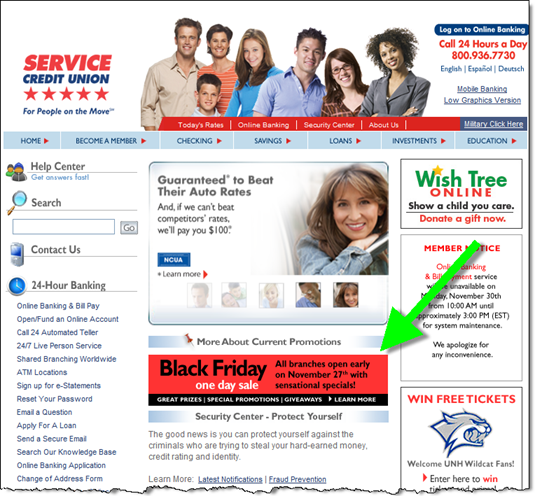 Notes:
1. Now if you have in-store branches, it’s another matter. Desert Schools FCU opened its 24 WalMart branches at 5 AM along with the retailer.
2. Extra interest on a $1000 CD for 3 months is about $7 per month, or $20 total. And that’s before tax.
3. The almost unreadable type on the bottom of the small banner mention great prizes and giveaways, but the landing page makes no mentions of prizes. Now, free stuff would make it worth a trip to the branch, so I wonder why the CU didn’t mention that on the promo page? Maybe they didn’t want people to show up only for the prizes?