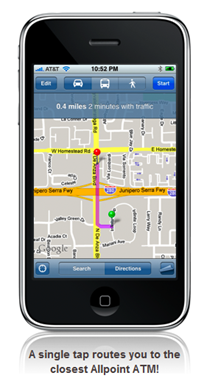 This is the application I wanted to build, a surcharge-free ATM finder, but my business partner wisely talked me down from that ledge last month (see note 1). I can officially deep-six that idea with the launch of Regular Rate and Rhythm Software‘s Allpoint ATMs: Surcharge-free ATM Locator.

The app went on sale today in the Apple App Store for a one-time $1.99 fee (iTunes link). The app, which directs users to one of 37,000 Allpoint ATMs, could not be simpler:

Using WiFi, it took 19 seconds from the moment I pressed the application button to when the nearest ATM location was listed, inside a Safeway five blocks away (note 2). With WiFi off (Edge network), it took just 4 seconds longer. Mapping the location, if necessary, took a few more seconds.

There are very few finance apps where users will willingly pay a fee. But this ATM finder, which saves about two bucks every time its used (note 3), should be popular at $1.99. Of course, it won’t be long before the free, ad-supported version comes along, so the windfall may be short-lived.

Bottom line: This is a great tool for credit unions, community banks, and direct banks looking to compete against the massive ATM networks of the major banks. The best strategy is to build this right in to your own iPhone/Android/Blackberry app. But until then, you can at least point customers to this app.

Notes:
1. While it’s a great opportunity for financial institutions, or scrappy coders to build, it’s ultimately not what we want to focus on. Still, it could be a gold mine, at least until financial institutions, especially credit unions and community banks, start adding it to their own iPhone applications.
2. This was news to me, even though I’ve lived in then neighborhood for a decade.
3. Assuming you would otherwise use an ATM which levies a $2 surcharge.