When I was a deposit product manager in the late 1980s, I worked on a project to bring out an equity indexed certificate of deposit. That project died, one more merger casualty, but I've always been intrigued by the product.

Over the years, a number of banks have offered market-indexed CDs, but they've never been much more than a niche product. That's OK. More than half of Amazon's book sales are from titles not found at retail bookstores. The Internet is a great place to mine the niches. Everbank has already proved that by moving nearly $1 billion worth of foreign currency-denominated deposits.

Analysis
The problem with equity indexed CDs is that they are crummy investments. By the time you pay for the hedging, marketing, and bank overhead, there's not much left over to pay the investor.

Let's look at Everbank's latest incarnation. The MarketSafe CD provides a total return based on a relatively complicated formula that averages S&P 500 prices at six-month intervals during the five-year term. In an up market, the CDs typically return 40% to 60% of the S%P gain (click on inset below). 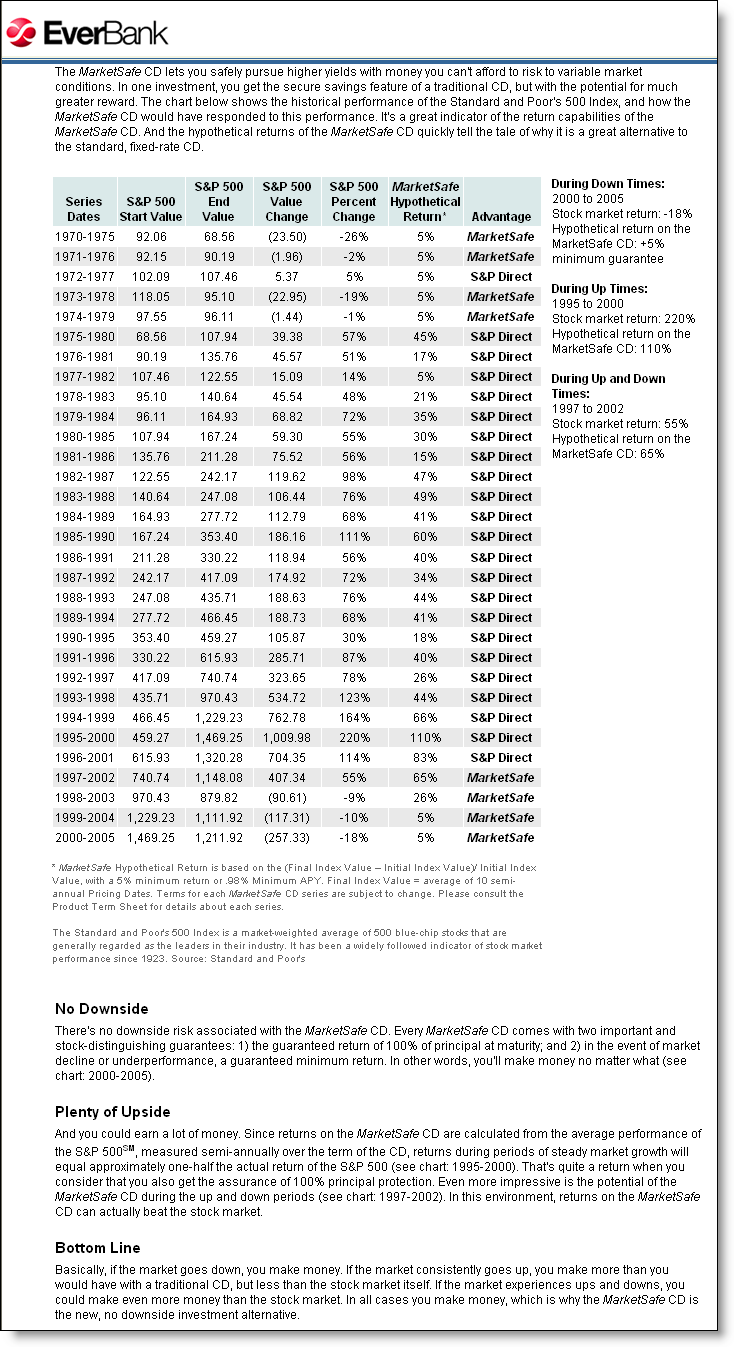 By Everbank's own figures (click on inset), its CD would have only beaten the S&P 500 index eight times during the previous 31 five-year periods beginning with 1970-1975. And by our estimates, the return would have beaten a normal 5-year CD more than half the time, 17 out of 31 periods. But only twice did the MarketSafe CD beat both the S&P and a regular CD.

Expected returns would be higher if the investor simply bought a mix of regular CDs and S&P indexed funds. The most conservative would be an 82% CD, 18% S&P mix that would still return all principal even if the S&P went to zero (assuming 4% CD APY). For the less conservative, a 67% CD, 33% S&P split would still return the principal even if the S&P dropped 40%. You get the idea.

But the target market for MarketSafe CDs is probably someone that never invests in equities. For that person, the MarketSafe is a reasonable way to put a little money "in the market." From Everbank's perspective, it's a nice addition to their unique deposit product line.

Every year it’s a battle to win approval for your business
plans. This process, though far from perfect, is a necessary evil to ensure
that only the most promising plans are funded.

Online banking, which in the U.S. generates little direct
revenue, often requires creative spreadsheeting to show a positive
NPV. Following are some of the positives to incorporate into a winning
business case.

If you are looking for the biggest bang for your buck, look
to online lending and small- and micro-business initiatives. According to
Celent’s study across 1.5 million Digital Insight users (in 2001),
online lending generates four times the combined value (NPV) of banking/bill
pay. Business services were even more valuable, resulting in returns of
nearly six times that of banking/bill pay. 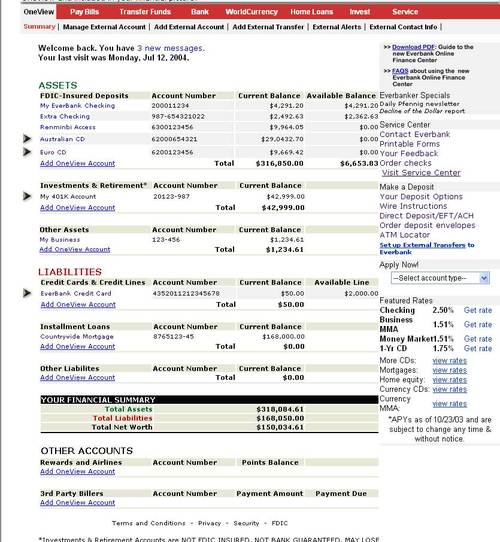 Everbank made a sizable investment in a new online
banking platform, a highly customized mix of Metavante and Teknowledge
software. Previously, the bank used the S1 online banking platform.