Even though it was a much-hyped topic in the late 1990s, our answer when asked about mobile banking was, "Fix your Web-based banking, add email alerts, and mobile will take care of itself." 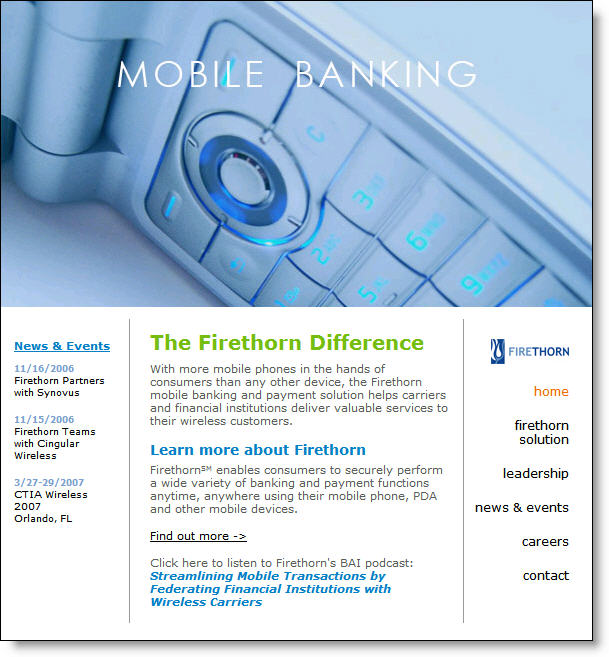 But it looks like times may be a-changing. Cingular is throwing its considerable muscle into a phone-centered service using Firethorn's <firethornmobile.com> new platform (see homepage right), and the U.S. market for wireless services is enormous (per MasterCard & Cingular during their Nov. 16 presentation at BAI's Retail Delivery Conference):

Even more interesting, ClairMail shared market research showing that nearly two-thirds of U.S. consumers aged 18 to 34 have used text messaging during the past three months, demonstrating that even in the laggard U.S. market, a core group of consumers is ready, willing, and able to use the phone for more than just voice calling.

Analysis
There are three main reasons why mobile banking's time has arrived:

1. It works on common phones: Previous generations only worked on a subset of high-end PDAs; now most mobile phones can handle mobile banking.

2. It has a business case: Mobile banking can both increase fee income by being a core component of a Premium Online Banking service (see Online Banking Report #109) AND lower costs by migrating voice calls away from the IVR and into self-service.

3. The youth movement: Younger consumers interact with each other in real time via text and instant messaging. There is little doubt that they will value the same type of interaction with their bank.

We'll be looking at this subject in much more detail when we publish our first exhaustive report on the subject in January (see Online Banking Report in late January or early February).

BAI's Retail Delivery Conference continues to offer an excellent array of speakers on almost every delivery topic, from the "branch experience" to "optimizing multi-channel delivery." But one area that's barely covered is loan originations.

Only one session, out of 36 total, dealt with lending issues this year. And it was a last-minute replacement, not even in the program guide, substituting for NetBank and UPS's Banking on Brown, scrubbed after the announcement last week that the effort was being shuttered (see our coverage here).

Cornerstone Advisor's Steve Williams presented Consumer Lending: It's Not Just a Transaction Anymore. Although lightly attended, due to its placement at the closing moments of the show, he discussed a number of great ideas for improving loan originations, both online and in other channels. We'll look at some of them in more detail in coming weeks.

The presentation is available via email from swilliams@crnrstone.com.

For the next three days, I'll be in Las Vegas looking at the hottest new technology and innovations at the largest financial services event in the world, BAI's Retail Delivery Conference.

I'll report here on some of my favorite topics. If you are there, let me know what you found most interesting by emailing jim@netbanker.com.