Last October, Vantage Credit Union launched one of the most novel banking services of 2009 (or ever for that matter), transactional banking through Twitter direct messaging (see note 1). The CU earned our OBR Best of the Web designation for its creativity.

Unfortunately, it doesn’t appear the service has gained much traction yet. The 103,000-member St. Louis, MO-based CU has 322 Twitter followers on its public feed and about 200 on its protected TweetMyMoney feed where the t-banking takes place (Note: Updated per comment). The majority of public feed followers are analysts, bloggers, and other credit unions.

But Vantage’s Twitter move isn’t about number of users. It’s about keeping its brand relevant with its social networking members. And splashing Twitter across your homepage is a great way to do that (see screenshot below).

Now Vantage is back at it, partnering with Finovate-alum, Geezeo to offer state-of-the-art online personal financial management (press release). It will be fun to see what VCU EVP Eric Acree, a Filene i3 member, does with the Geezeo platform. I think it’s safe to say that they will put a novel spin on PFM.

Vantage CU continues to promote its Twitter features on its homepage
(26 Feb. 2010) 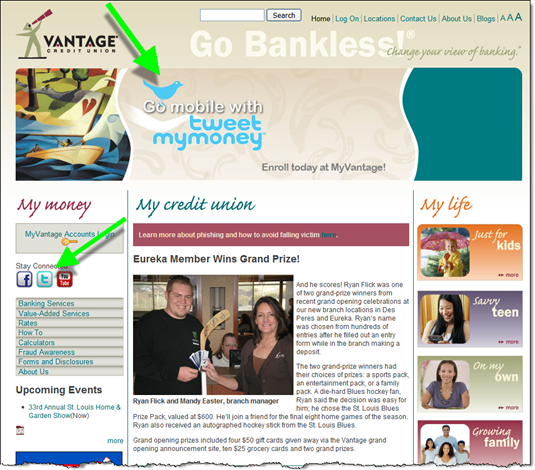 Notes:
1. Stanford FCU’s website still says Geezeo-powered MyMo is “coming soon” (link to the Oct. 31, 2009, dated announcement), but the link to the new service has been pulled from the SFCU homepage.
2. For more info, see our Online Banking Report: Leveraging Twitter (May 2009)