In one of the more interesting investments in recent months, Chinese social network, Renren has led a $40 million funding round for investment platform, Motif Investing.

The funding takes Motif’s total capital to more than $120 million.
Renren founder and CEO Joseph Chen said that Motif was the kind of “disruptive technology” that can “transform markets.” He sees the platform as serving both retail and institutional investors in the United States and around the world.

But perhaps it was Carl Stern who put it best. The former Vice Chairman of the Investment Banking Division at Goldman Sachs and former Chairman and CEO at The Boston Consulting Group, said “Motif Investing is experiencing success because it provides a differentiated model to advisors and retail investors that make smart investing simple at minimal cost.”
The investment from Renren is part of the company’s campaign to invest approximately $500 million in fintech startups. According to the Wall Street Journal blog’s reporting, Renren is looking to diversify its revenue away from an emphasis on advertising. The blog quotes Chen saying, “making money purely through mobile advertising in China is too difficult.” 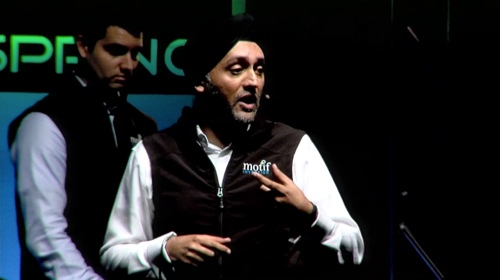 (Above: Motif Investing co-founder and CEO, Hardeep Walia at FinovateSpring 2014)
Motif says that Renren’s support could help the company eventually expand into China. For now, the company is looking to move into both the U.K. and Hong Kong in 2015.
Motif’s technology lets investors and traders build their own exchange-traded funds. The platform leverages the creativity of its investment community to develop investment products that are often more unique and topical than those traditionally available.
Founded in 2010 and headquartered in San Mateo, California, Motif Investing is a multiple Best of Show award winning alum, earning honors for demonstrations of its technology at both FinovateFall 2013 and FinovateSpring 2014.