PeerTransfer, a company that makes it easier for international students to pay their tuition bills, should now have an easier time paying its own bills, thanks to a new installment of funding.

The new installment, which almost doubles its previous total, brings peerTransfer’s total raised to $43 million. It plans to use the new capital to expand coverage and penetration at schools in Australia, Asia, Canada, the U.K., and U.S. and advance its payment platform. 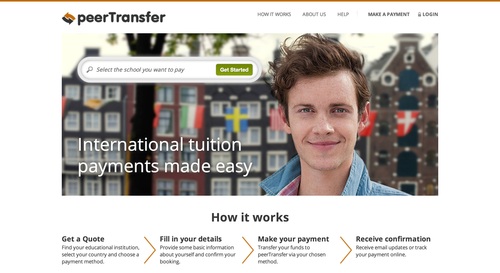 PeerTransfer enables students from 200+ countries and territories to pay their tuition and room & board using bank transfers and credit and debit cards on its payment platform. It is partnered with 600 schools across 10 countries.

Since launching in 2009, the company has processed over $1 billion in international payments and is adding 50 new clients per quarter. During the first half of the 2014/15 academic year, it doubled year-on-year revenue and reached profitability. Alex Finkelstein, General Partner at Spark Capital states that peerTransfer is poised for even faster growth and expansion.

As for the rest of the academic year, CEO Mike Massaro states that the company is on track to deliver $1 billion in cross-border payments processed for the full year.

PeerTransfer recently won the 2014 BostInno’s 50 on Fire Award. It demonstrated its international payment solution at FinovateSpring 2011.