PayPal has been working on enabling in-store payments for much of its corporate life. It launched a debit card in January 2001, less than 18 months after the company launched. The card was used to tap funds held in PayPal accounts.

Fast-forward 12 years. We are now entering the era of the digital wallet which features the ability to store multiple payment cards that can be changed manually or automatically at the point of sale. PayPal is well positioned here, since its core product has offered that capability for a dozen years.

It’s easy to see how PayPal becomes a major, if not dominant, mobile-payments player. But it’s still a few years before NFC (or whichever) handsets and POS terminals become mainstream (see our latest report for more info, note 1).

So what can the company do now to make more inroads at the point-of-sale?
Plenty, it turns out:

And, the big one, still in the planning stages:

Bottom line: PayPal, Google, Moven(bank), UMB (powered by Dynamics), Wallaby, and others aren’t waiting for NFC. It’s work-around time, at least in the United States. A promising tactic, at least for users, is the “plastic wallet,” a traditional mag-stripe card (MasterCard, Visa or Discover) for point-of-sale use. Then, like PayPal Anywhere, the user routes the transaction to an outside deposit account, or another card, pre-registered in the system (note 2). 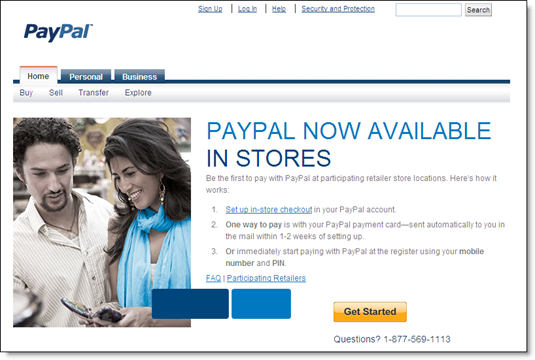 Pitch for in-store payments served after logging out

Landing page after clicking the “start” button above 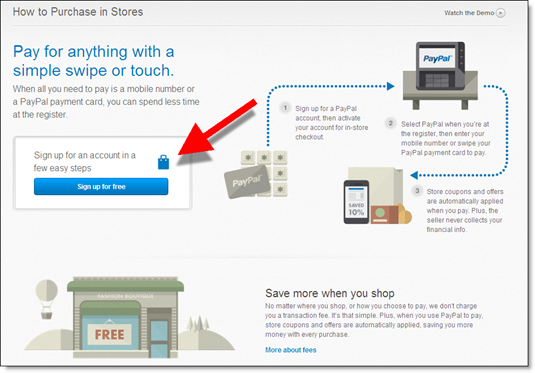 ———————————————-
Notes:
1. See our Online Banking Report on Digital Wallets (published Feb 2013, subscription).
2. The business model of the plastic wallet is a challenge. It could be workable if all transactions are routed directly to deposit accounts via ACH (aka “decoupled debit”). Also, advertising (Google Wallet) and/or interest charges (PayPal’s Bill Me Later) can prop up the P&L.