Global Debt Registry has secured $7 million in Series A financing. The company plans to use the new capital to help drive sales growth and expand operations. The latter includes both increased marketing as well as a move into new asset classes in the consumer debt market.

The individual investors were not immediately disclosed. 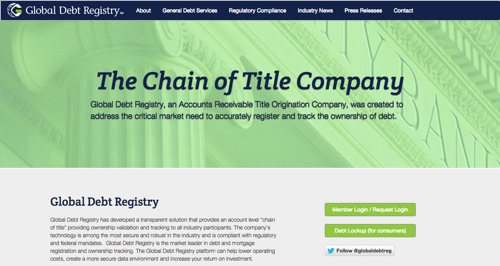 Global Debt Registry serves as a clearinghouse for the debt market, providing definitive and independent information on debt ownership. The company’s technology provides an account level “chain of title,” bringing standardization, transparency, and digitization to the market.
The company also provides a consumer solution, Debt Lookup. Consumers can use this resource to see who actually owns their debt, useful to make sure that collection agents looking for debt repayments, for example, are legitimate. Consumer Reports, in its look at the technology called Debt Lookup “promising” as a way to deal particularly with “zombie debt” that consumers often believe has already been paid off.

Recently profiled in American Banker, Global Debt Registry is – in part – fintech’s response to the world described by Jake Halpern in his book, Bad Paper: Chasing Debt from Wall Street to the Underworld. Bad Paper describes just how perilous the unregulated consumer debt market is, and how unscrupulous characters can take advantage of unsuspecting debtors. This has led Halpern to say that a debt registry is a “very common sense idea” and that “it’s kind of mind-boggling in some ways that it hasn’t been implemented already.”
The team from Global Debt Registry agrees. Quoted in American Banker, Global Debt Registry CEO Mark Parsells expects the dollar volume of charge-offs and the number of people contacted by third-party bill collectors both to grow significantly over the next decade. “Particularly with the growing balance after insurance in medical debt,” he said.
Founded in 2009 and based in Wilmington, Delaware, Global Debt Registry made its Finovate debut at FinovateFall 2014 in New York. Stay tuned for our CEO interview with Global Debt Registry’s Mark Parsells coming next week.