For card issuers, the latest online application activity is is either good news, bad news, or neither since Compete tracks only applications submitted, not approvals. This following chart was presented in its webinar today. You can request the entire deck at the bottom of its blog post.

According to Compete, there were more than 12 million credit card shoppers in the U.S. in December, up 6% from November and down 11% since a year ago. Of the shoppers, about 20%, or 2.4 million submitted an application. That was an 8% increase from Nov., but a 23% decline from a year ago.

But Compete has no way to measure whether the card applications it tracks are approved. Recent data from Lending Club shows that less than 10% of its online consumer loan applications were approved in Q4. The big credit card issuers probably do a bit better by driving creditworthy borrowers to their sites via direct mail and online advertising.

Assuming approval rates of 20%, the 2.4 million credit apps in December resulted in about a half-million new accounts. 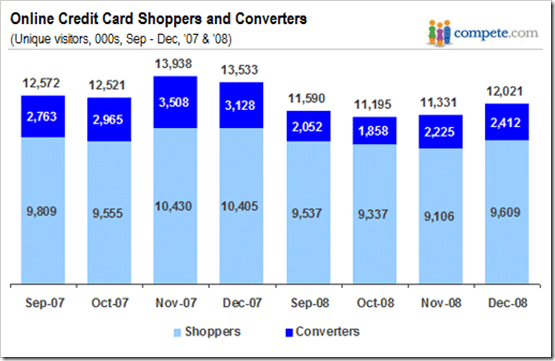