Being a small business short on funds is never a good thing. However, with more startups tackling short-term funding headaches for small businesses, there are now more options available.

For example, BlueVine Capital raised $18.5 million in a series B round today, bringing its total funding to $24 million. The announcement comes a day after its competitor, Taulia, pulled in $15 million.

The Palo Alto-based company will use the funding to expand into new verticals and add software integration. It also plans to double its employee base this year. 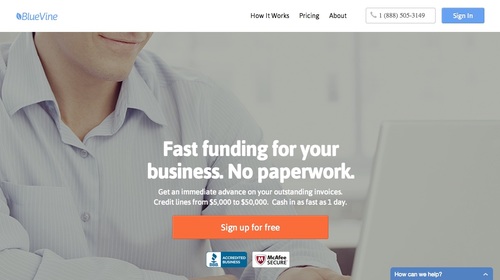 In March of 2014, BlueVine beta-launched its cloud-based platform that helps small businesses smooth out their cash flow by freeing up funds stuck in unpaid invoices. Businesses can receive credit lines from $5,000 to $50,000.

Since launch, BlueVine has processed thousands of invoices and provided several million dollars to small businesses in the U.S.

Check out BlueVine’s debut at FinovateFall 2014 in New York.